What’s All The Fuss About The Derry Girls?

Lisa McGee, a wee local girl, who was born in Derry, Northern Ireland, and studied drama at Queen’s University, Belfast. She was writer on attachment with the Royal National Theatre in London in 2006. McGee is the creator and writer of Derry Girls, a comedy series that began airing on Channel 4 in the UK in January 2018. Other programmes and work included Raw and Girls & Dolls and she hales as a screenwriter and writer. 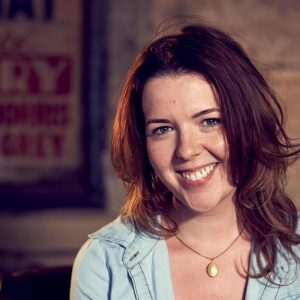 Derry is a city with much to say for itself.

Five miles from the border with the Republic of Ireland, and profoundly affected by decades of the Troubles in Northern Ireland, it is also renowned for its unique sense of humour.
The city’s personality is a patchwork in which the scars of war and social injustice run alongside razor-sharp wit, brutal put-downs, and a stream of outrageous anecdotes about local eccentrics. This comparison was impossible to explain to outsiders who had never visited – until Derry Girls came along.
The hit Channel 4 show follows the misadventures of four teenage girls (and one “wee English fella”) facing the everyday challenges of growing up against the backdrop of sectarian conflict. It is the brainchild of writer Lisa McGee, who based much of it on her formative years at an all-girls school ( Thornhill College) in the city.
“I always wanted to write about my friends, and the whole convent school thing, because I thought it was hilarious,” says McGee. “The whole backdrop of the Troubles happened very naturally because that was just what was happening.”
The first series was a wild comic romp that involved the girls burning down a chip shop, digging up a dead dog and bearing witness to a statue of the Virgin Mary weeping with what turned out to be dog piss. 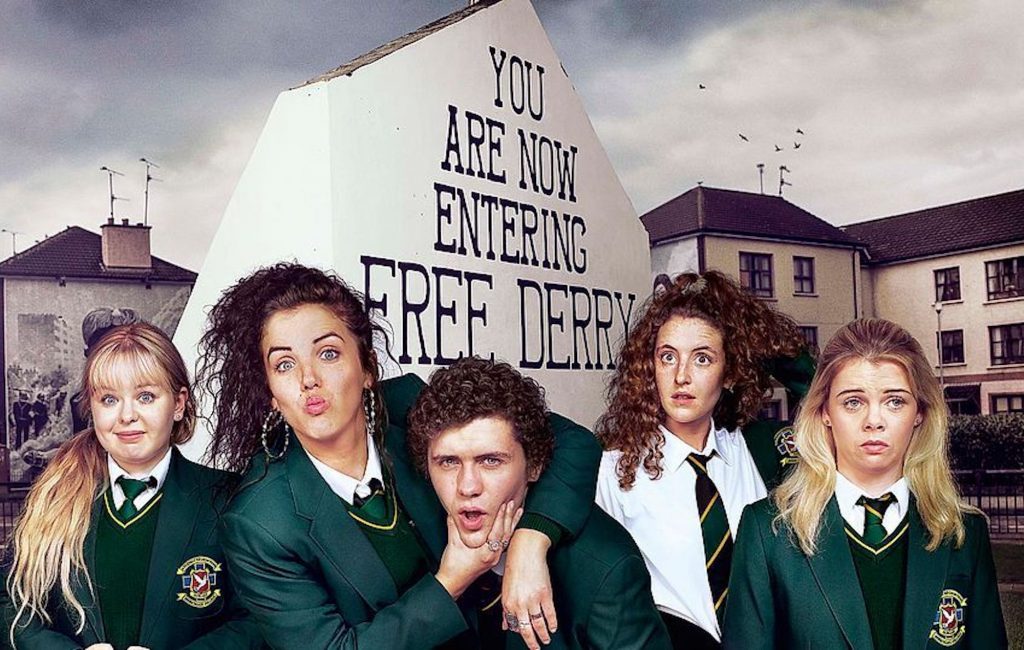 “It’s inspired by real things that happened to my family and friends,” says McGee, “but then I push things further for the comedy. I always wanted it to have an urban myth quality too – that we’ve all heard these stories, but these girls are the people that those things actually happen to.”
When it comes to their representation, the people of Derry can be a discerning lot – something she was all too aware of when putting pen to paper. “I thought to myself, this needs to be good, or I’ll never be able to go back home again!”
When the show premiered, the response in Derry was unprecedented. From WhatsApp groups to Facebook posts, everyone was pointing out the phrases and scenarios they recognised, and the characters people most resembled. It quickly became the most-watched TV series in Northern Ireland since records began.
“We couldn’t have wished for a better response,” says Nicola Coughlan, who plays the ever-anxious Clare. “I said to the others beforehand, the Derry people are very honest. If they don’t like our show, they’ll let us know. But they are so proud of it, and they treat us so well when we go there.”
The success continues and the show receives an international rollout on Netflix. Across review sites and social media, new fans are drawn in by the familiar sight of awkward teenagers embarrassing themselves. Derry Girls has truly gone global.

While the Troubles might not be widely understood in far-off countries, its setting actually struck some unexpected chords.

Coughlan recalls one of many comments she received about the show on Twitter.
“I got a message from a girl who grew up in the Kashmir region, and she said this is exactly what it was like for me growing up in a political divide. I hadn’t thought it would resonate like that – I just thought that was amazing.”
The cast say that while they expected it to do well in Ireland, they were unsure of how well it would translate, having been so faithful to Derry’s niche sense of humour; from put-downs like “dose” (basically, a person who’s a pain in the neck) and “shite the tights” (a nervous person), to the stresses of ordering from the chippy on a Friday night, or fleeing the town before the Orange Order march on 12 July.
Louisa Harland, who plays dim-witted Orla, is from Dublin. “Only people from Derry will understand how many in-jokes are littered within it. There’s even one or two that I didn’t get! But the thing is, it’s so layered. There’s jokes for Derry people and then there’s jokes for everyone.” 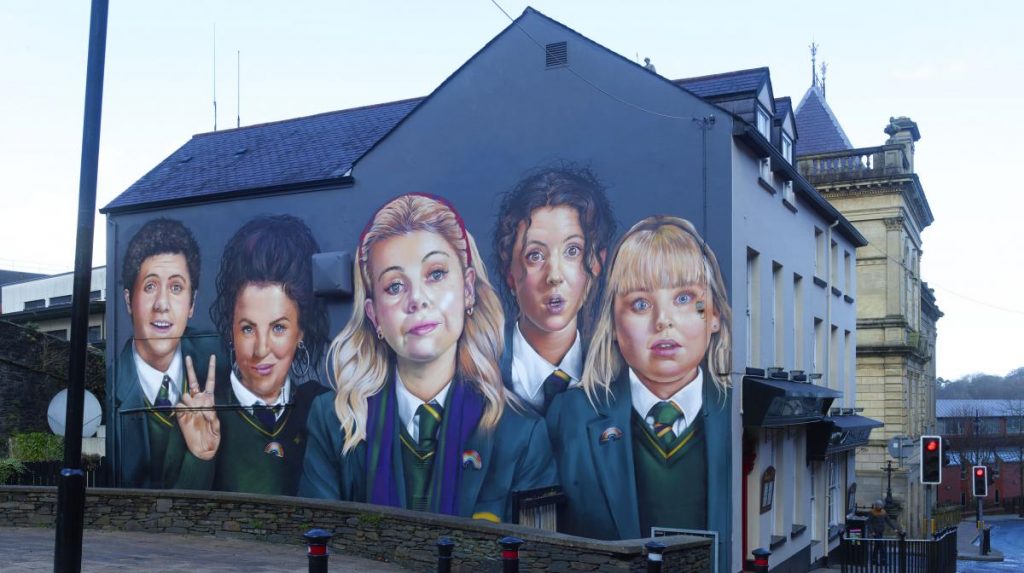 Now, more and more people are visiting the city to get in on the joke. Derry’s tourism industry has been growing since the turn of the millennium, with many people coming not just to learn about the political history and Derry tours, but to enjoy the nightlife, the annual jazz festival, halloween parades and other cultural treats.
Murals that commemorate key figures and incidents from the Troubles are also a curious part of the attraction. Typically, these reflect on the darker moments in our past, but a few weeks ago, the Derry Girls made for a unique new addition.
“It took four and half days to put it up,” says Karl Porter, who works with local group UV Arts. “People were coming along to watch, just being curious and nosey. Obviously, we’re used to the murals showing our history, but this is about showing a new side. People were pleasantly surprised.”
Pictures were going viral even before it was finished, and already, it has become a new tourist attraction. The actors say when they came to see themselves immortalised for the first time, it took their breath away.
Ruairi O’hEara who runs Tours of Derry, which takes groups, universities, colleges and visitors on walks around the city’s historic walls and town centre. He has been taken aback by the interest from foreign tourists.

“Last week I had a group of 50 or 60 kids from South Africa, Australia and New Zealand, and the first thing they said to me was, ‘Where’s the Derry Girls mural?’ I couldn’t believe it. There’s been about seven other groups now asking the same thing, gap year students from the US, from Spain, all over.”
Ruairi says this fits in with a new phenomenon of screen production tourism enjoyed where Game of Thrones is filmed in Belfast and has the best Game of Thrones tour from Belfast, and at locations across the island which are featured in the Star Wars franchise. Now, just weeks after this new mural was painted, it seems no one can visit Derry without a selfie in front of it.
This tribute to the Derry Girls stirs a local pride which runs deeper than mere enjoyment of the show. For many, it’s a reminder of the crucial role women played during the city’s troubled past.
Saoirse-Monica Jackson, who stars as the lead character Erin, says this is the very essence of the show. “It was the women who were keeping the families going through those years, working in the shirt factories and keeping the house, it was bred down through the generations.
“Derry women are strong, they know what they want, they’re sassy, courageous, brave, and they look after each other. But they’ll let you know when you’ve got above your station too. It’s a sisterhood.”
The beauty of Derry Girls is that it doesn’t attempt to show a positive side of the city in isolation from, or in contrast to, the conflicts of our past. Instead, it shows comedy as a coping mechanism, which carried people through repeated hardships. In writing the show, Lisa McGee says this became all the more evident to her.
“It’s so impressive when you look back and think what our families protected us from and lived through and coped with, and what became normal. I think the fearlessness and the humour that we dealt with is so admirable.” 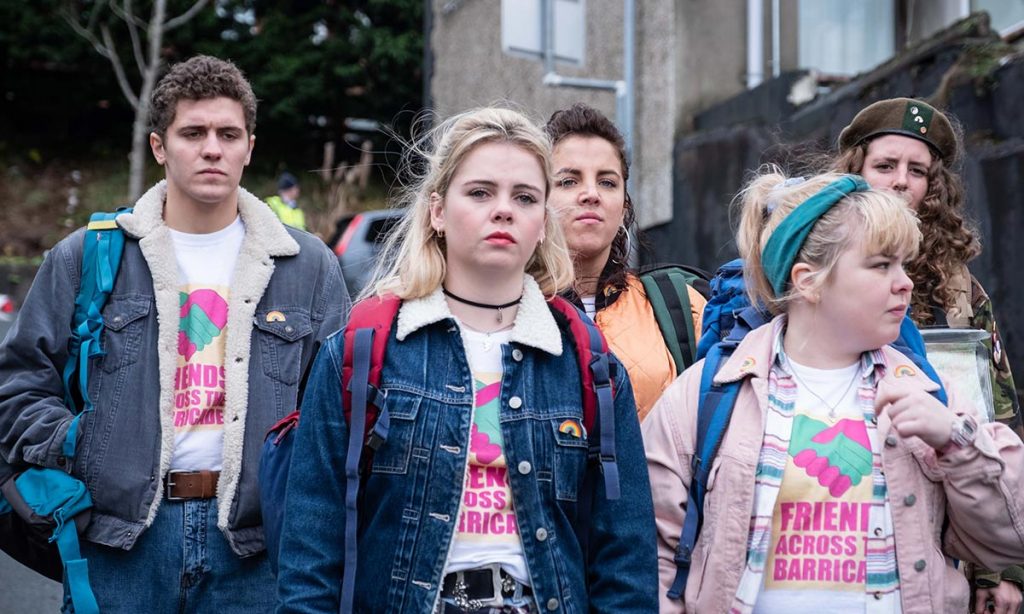